Thanks to some great help on the SDIY list, I know what the problem was with the EG simulation. There is a transistor with the base wired to the emitter and then wired backwards to a diode which resets the Flip-Flop. SPICE did not like this and did not properly model it. Oren, from the SDIY list was the first to recognize this transistor was acting like a zener diode. I merely replaced the transistor in the simulation with a zener diode and the circuit works perfectly. The zener voltage determines the peak voltage for the envelope, for a transistor that will be about 5 volts. 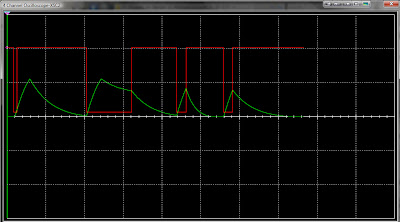 Here is a screen shot of the EG. The red trace is the "key down" and the green is the output. The first trace shows that in normal operation, even a short duration key down causes the EG to peak then decay. Next, I held the key down past the peak to show the EG will peak, then decay to the duration level, then decay to 0 with key up. Next is a trace with the Damp switch on. The EG decays immediately and quickly to 0 after a key up. Last is the Quathin switch on. It, too decays immediately on key up, but decays with the decay setting rather than quickly as with the Damp.
Posted by dingebre at 8:01 PM