I didn't get the audio/video up. Decorating for Christmas, family party, and just spending time with my wife and kids took priority.

That said, I did get the VC Trigger module together and working. I'm on the road next week and am going to stop by Nyle's to pick up the Frequency Divider and show him the Trigger Generator.

Next up will be the Sample & Hold.

I promise I'll get some video together right away.
Posted by dingebre at 10:45 PM No comments: 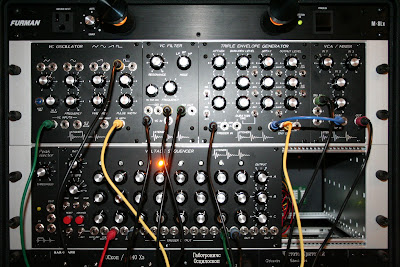 I tried to get some audio and video, but I was way over driving the audio input on my camcorder, so here's a still. Top: VCO, VCF, Triple EG, VCA. Bottom: Peak Selector, Sequencer. Not shown: Frequency Divider (Nyle still has it). At the very bottom is a Frac Rack with some utility modules I put together;  Blacet Bar Graph, 2 mini O'sopes, A440 tuner, and a Yusynth Voltage Standards module (thanks Yves, yusynth.net).

The good news is it all works! The Sequencer, Frequency Divider (THANK YOU Nyle), VCO, VCA, VCF, EG; it's a real system that now needs expanding!

The sequencer is amazing. Unlike any other analog sequencer I've seen or used.

I will have some video and/or audio this weekend. I'll figure out someway to get an audio and mic feed into the camera. If I have to use the built in mic, I will but I'd like higher quality audio. I want to do some tutorials to show how the different modules work and the effect of different connections.

Update on the Frequency Divider. I think I wrote that the divide by 11 was dividing by 7. There were two problems. First, I had installed a 2.2k where a 22k should go and there was a 3.9k resistor missing in both my schematic and Nyle's original schematic which should be in series with the reset diodes to the Flip Flops. It's kind of funny. Nyle said he probably would not have found the missing 3.9k if not for my stuffing mistake. He explained that sometimes the final schematics were drawn after the PCB layouts were done and the modules were in production. They often did the layout from the first "hand drawn" drawings (really, they were all hand drawn, but the final ones used drafting tools so were much easier to read). I am really spoiled being able to use a great layout tool like Eagle. Worth every penny.

Bottom line is Nyle did get it figured out. I added the 3.9k to the schematic and ordered a small production run.

So the next couple of months should see the culmination of the Synthasystem. 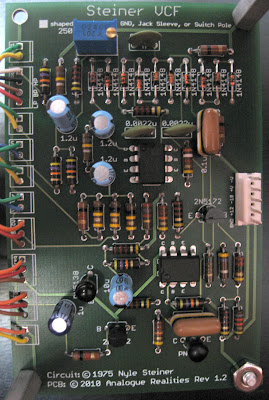 Tony just finished his VCF PCB and wrote, "just finished my VCF, waiting on the panel but it tested out fine and is mean and nasty!

thought you might like to see a picture of my populated board as i used a lot of NOS parts. all carbon composite resistors, a couple vintage transistors (5138s) and .1uf caps, and original AD SSM chips.
thanks again, it was a lot of fun. i look forward to building more Steiner circuits."
Thanks Tony!
Posted by dingebre at 3:12 PM No comments:

Sorry, no photos or audio...

I received some PCBs:


Small production run:
On order:
Prototypes:
Small Production Run:
By "small production run", I mean less than 10, sometimes just a handful.
I'll try to catch up the website for the new modules.
The modules left to go:
In testing:
So, really the end is in sight for the capture of all the Synthasystem modules. I still need to punch out some panel designs and then actually finish building the things. I'm hopeful by early next year I'll have at least one of every module working and racked.
I will probably offer the Microcon as a PCB, too. I don't think I'll do the Synthacon as the Synthasystem is much more interesting to me. The Microcon is interesting as a standalone desktop or rackable synthesizer. However, it does use Vactrols which I have heard are banned in Europe now. Nyle has suggested he might have a workaround, so stay tuned.
New modules? Well, Nyle and I have discussed this and have a couple of ideas. I'd like to see a formal trigger delay and Nyle has some other interesting ideas. So, if interest is really there, maybe.
Posted by dingebre at 12:55 PM No comments:

The Frequency Divider is done, but I'm having a problem. The divide by 11 is dividing by 7, not 11. All else works just as it should. I've gone over my schematic capture many times comparing to Nyle's original and just following the logic. I can't find an error either in the logic or my capture. I've tested continuity, switch operation and wiring, no luck. Nyle has taken a look at my capture and didn't see anything either. I must have some kind of wiring error, but it escapes me.

More prototype and limited run production PCBs are on their way. Should be here next week.
Posted by dingebre at 12:15 AM No comments:

I've been working on the layout for the VC Trigger Generator (ready for prototype) and the Sample & Hold. I've had some good help from the SDIY list again regarding "guard rings" as well as some one on one instruction from Nyle on the topic. The Sample & Hold is almost ready for prototype. I had it done and realized I needed to add the circuitry to accommodate Voltage Triggers. I added the components but now have to clean up the auto-route.

Next, the Peak Selector is done and seems to be working, although it still baffles me a bit. I need to get it hooked into an actual patch to see what it does.

Last, I have my Frequency Divider PCB stuffed and behind a panel. I now need to hook up the panel controls and see if it works. I am hopeful...
Posted by dingebre at 1:45 AM No comments: