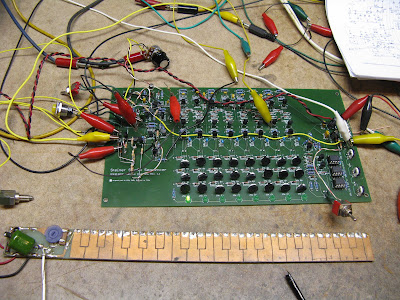 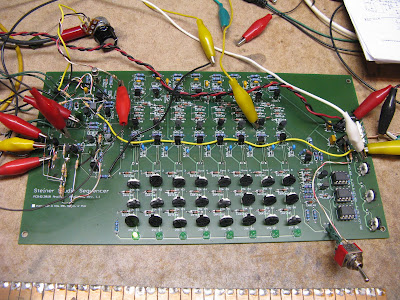 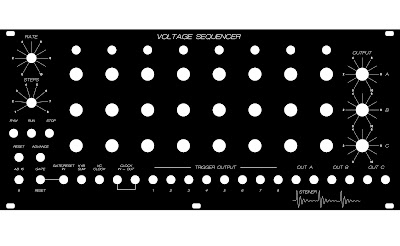 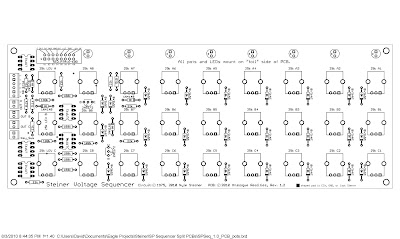 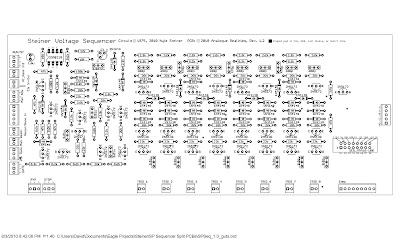 Thank you Nyle!!! He got the sequencer debugged and working better than ever. Here are some photos from Nyle's workbench. You can see the added components at the upper left of the photo testing features added in the later black faced sequencers. The schematics were corrected, Nyle has given those a once over and so the sequencer is ready to order as soon as I re-do the PCB layout since some components were added and a couple were moved. I already briefly described the functionality, so won't do it again here. I've always been fascinated by sequencers and this one of Nyle's is pretty cool.
You can see the touch keyboard Nyle made years ago which he is using to "play" the sequencer, very, very cool. Nyle is one who has an uncanny intuition for circuit design.
I've also put up what I hope will be the production PCB parts layout with component values. Two PCBs plus a Power Regulation board. An optional trigger conversion board can be piggy backed, too so you can have voltage triggers in and out rather than S-triggers. Also, an updated panel layout and a photo of the original Vlotage Sequencer. This early sequencer lacked the "gate", "stop" "VC clock", "rym" and "keyboard sum" features. The later sequencers with black panels had these features added.
This is going to be a big PCB order which makes me nervous.
I have recruited some help to test build these next PCBs (after Nyle and I have built one to make sure they really work right) as a sort of test run to see if the documentation and BOMs work well. I'm really excited again.
Posted by dingebre at 7:59 PM