First, I've had a couple of questions regarding availability. I want to make it clear I intend to release the schematics and PCB artwork. I don't think I'll release the Eagle files themselves. I fully intend to approach this with the intent to provide a reasonably wide audience the chance to have these modules. For the DIY people PCBs and maybe parts kits through the Bridechamber and maybe other sources. I will post schematics here as they are checked, tested, and verified. I will also give them a more permanent home on a web site so the hard core DIY'ers can have at them. For those who don't want to solder, I might offer fully assembled modules, maybe in limited numbers or limited modules, I'm not sure yet. So, the basic answer is yes, I will make this all available. 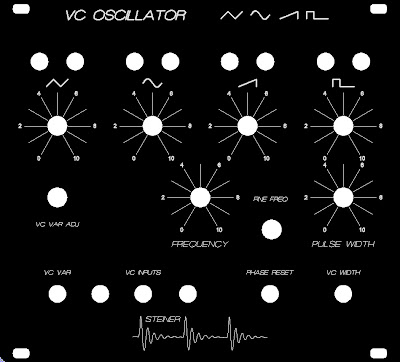 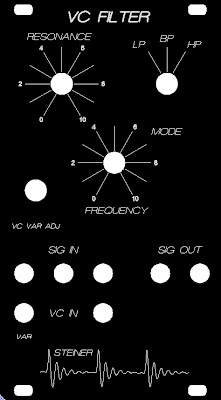 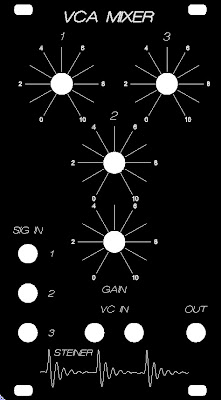 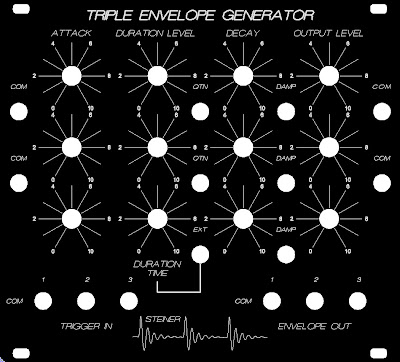 Here are the four panels I've finished so far and a shot of a standard Synthasystem. I've played around with spacing, font sizes, etc. and I think I've got some standards which will work. Nyle used multiples of 1.75 inch wide panels. I'm going a little narrower. Where his VCO and EG used a 7 inch wide panel, I've shrunk them down to 28 HP, or about 5.6 inches. It makes things a bit tighter, but now, 3 units can live in an 84 HP euro rack. The VCO could probably be smaller, but I also want to be able to mount the PCB behind it parallel to the panel due to its size. I want people with standard euro racks to be able to use these things, too. I'm going to scale the other modules from this size and use 14 HP and maybe 7 HP panels for Nyle's 3.5 and 1.75 inch modules. the filter and VCA fit nicely on a 14 HP module. I'll try the Phaser or some other single wide in a 7 HP space and see how it all works.

I've been able to keep almost all the relative positions of the controls and jacks. The VCA is one exception. I just didn't have the room across the bottom for the jacks, so I ran then input vertically on the left side. They fit fine and I think they look fine. I'm going to start the sequencer next I think.

I've been thinking about the PCB on the sequencer and I might split the schematic into two separate PCBs and connect them with some ribbon cable. I don't think I can reasonably make the PCB much smaller than it is and it is deep. If i split it up, I can stack the boards and maybe even mount them parallel to the panel.
Posted by dingebre at 12:32 AM